Vintage patterns, modern thoughts and Siamese cats for your perusal...

Come in and stay for a chat. Wit and intelligence always welcome. A sense of humor? Even better!

Eileen
A passion for Art Deco, hot jazz,lindy hop and balboa, and all things Yarnish; that's what you'll find here.

On February 5, 2017, Fa Sing died. He was a bluepoint Siamese cat, 10 years and 8 months old, and the most joyous, devoted, attentive cat I've ever known.

I've had a lot of cats--more than 20--and he stands out in a way that startles. From the first time I met him, he answered to his name. He was only two months old, and we were visiting the cattery to see him and his brother (Than Chai, whom we still have). Fa Sing means Blue Lion, and it was clearly his secret cat name.

He had an enlarged heart, and I mean in every way. He was opinionated, but so forgiving. When our rescue attacked and injured him, he still treated Shadow kindly, and even played with him (his brother, however, never forgave Shadow for attacking Brother).

Fa Sing was with me most of the time, and if I left he met me at the door, and told me all about his day. He followed me, "helped" me drink my coffee in the morning, and slept in my arms every night. If I turned over, he crept over my shoulder and nestled back in on the new side.

He leapt up to ride on my shoulders, let me drape yarn all over him while I was knitting, and even woke me a time or two when I was having a nightmare.

I couldn't save him, but at least we were able to keep him alive about a  year after he was diagnosed, and in the last months of his life I was lucky enough to spend whole days cuddling him and comforting him.

Missing him is still taking over my life in part, and it hurts. It hurts a lot. But it wouldn't be this painful if knowing him had been less wonderful. That silvery, little, pointed face with its wide blue eyes will live in my heart forever. 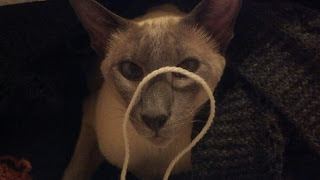